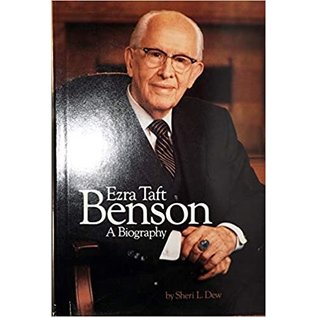 This is the story of Ezra Taft Benson, thirteenth president of the Church of Jesus Christ of Latter-day Saints. It is the saga of a farm boy who loved the land and the Lord – a plough boy who became a prophet. It tells of his romance and marriage to a “city girl,” Flora Amussen, a young woman who had more faith in him than he had in himself. He is a family man, the father of six and the eldest of eleven brothers and sisters. This is the story of the most formally educated president of the Church. He received a bachelor’s degree from Brigham Young University, a master’s degree from Iowa Sate University, and did post-graduate work at the University of California. He subsequently wrote several books, received many honorary degrees, and delivered thousands of addresses. It is the story of a man who, after working with rural people in various capacities, became the first Latter-day Saint to serve in the cabinet of the president of the United States – eight years as Secretary of Agriculture in the administration of Dwight D. Eisenhower. His fight to help the farmers of America be free and prosperous marked him as a man of conviction who stood by his principles despite enormous political pressures. Ezra Taft Benson is a man of God. Twice he served as a stake president and twice as president of the European Mission. At the close of World War II he served a mission of mercy, ministering to the spiritual and temporal needs of destitute Latter-day Saints in Europe. When he came to the office of president of the Church in November 1985, he had known more heads of state and was perhaps the most widely traveled of any prophet in this dispensation. He had served forty-two years as an apostle, including twelve years as president of the Quorum of the Twelve. The Lord tutored him well for his call as a prophet. There was divine design in his life that prepared him for the new and heavy tasks that lay ahead.